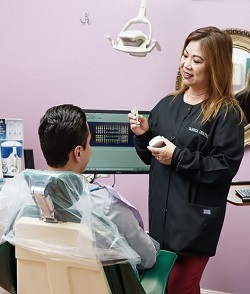 In 1988, Janet Repane Tanega, D.M.D. graduated from Centro Escolar University in Manila, Philippines with a Doctor of Dental Medicine degree (D.M.D). After graduating, she moved to San Francisco, California with her husband and young children. Dr. Tanega worked in every role in a dental office while studying to obtain her California dental license, which she eventually received in 1996. One year later, on March 8th, 1997, Dr. Tanega opened TANEGA DENTAL and had continued to create beautiful smiles in a family-like atmosphere, in the San Francisco Bay Area for over 20 years.

Dr. Tanega’s passion for the dental field continues to grow as a regular attendee of continuing education courses. A few accomplishments and awards include:

Dr. Tanega met her husband, Richard G. Tanega, in dental school, as they have been happily married for 35 years. They are proud parents of Helene, RJ, Reece, and Ray; along with four grandchildren—Darien, Jeffrey Jr, Jayda Rae, and Hayden; as well as, two dogs—Coco and Wags.

Dr. Tanega loves spending time with her family and friends during her free time. She is a regular student at her local Zumba class, and has been known to surprise the Tanega Dental team and patients with freshly baked desserts and homemade cooking!

Thank you for submitting your request. Our office will get back to you.